Surviving or Thriving: What Computer Assisted Billing Can Do for Your Law Firm 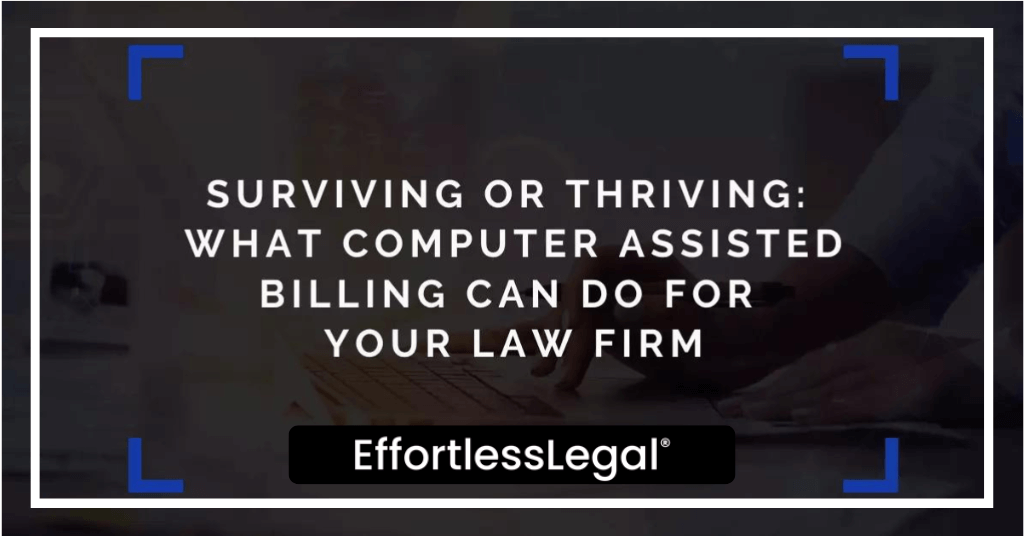 According to recent comprehensive surveys, COVID-19 for the most part did not devastate the legal industry, at least not the same extent as industries like restaurants and hospitality.  The studies indicate that on average most larger firms saw “mid-single-digit revenue growth”.  Smaller firms also saw on average only single-digit declines.

Nevertheless, cost control has become a priority for individuals and institutions alike.  This trend started with the 2008 financial crisis, but even after the economy rebounded, the cost-saving mindset was slow to recede. The legal field has been particularly sensitive to these predilections, and has been forced to find ways of appeasing more cost-conscious clients without sacrificing too much revenue.

This trend has been documented in a report issued by Georgetown University Law Center and Peer Monitor. It found that realization rates have fallen to 84%. Alternatively put, law firms are going unpaid for as much as 16% of the work that they do. This is down significantly from the normal realization range of 90 and 95%. If this payment rate was translated to most other professions it would be widely considered unconscionable.

Moreover, according to a recent Altman Weil Flash Survey companies have started bolstering their internal legal departments in order to reduce their reliance on law firms altogether. The survey found that “[m]ore than 85% of law firms finding that their strongest competition is coming from their clients.”

Similarly, for smaller firms, Clio discovered that 31% of consumers believe that legal fee rates are too high, while 35% don’t believe the potential outcomes are worth the money it would take to undertake a legal matter, according to their recent Legal Trends Report.

So what are law firms to do? They’re losing money from lower realization rates, and they risk losing clients from raising prices – too often in an attempt to recoup lost realization rates. The answer lies in leaning on existing technology to optimize firm performance wherever possible, particularly in administrative and managerial areas such as billing.

With these technological solutions come useful and organized data that can be analyzed to create data-driven approaches to streamline and maximize resource allocation in future maters.

There are two major reasons why simply raising fee rates is not a viable course of action to recoup revenue from floundering realization rates.

The first reason is that it doesn’t work. The expense of legal action is what is driving down realization rates in the first place. If you, in turn, try to raise prices further to cover those losses, all you’ll be doing is creating a vicious cycle that drives clients further away. It is an unsustainable model.

In fact, according to the Georgetown report, even though many of law firms that responded to the survey had increased their hourly rates, “clients continued to push back on rate increases, keeping pressure on the realization rates that firms were able to achieve”.  As this continuing trend shows, merely raising rates does not help profits, if the client pays fewer of the hours billed.

The second reason is that clients are looking for “reasonable” fees.  Rule 1.5 of the ABA Model Rules of Professional Conduct offers specific guidelines in the form of eight factors in order to help give form to what a “reasonable” fee is, as it could otherwise be a somewhat nebulous concept.

The Effective and Accurate Recording of Time

Documenting the time spent doing legal tasks is the life-blood of a firm’s revenue. If it is not accurately and efficiently captured and recorded, that is money lost.

An internal LexisNexis survey found that over 450 firms with 20 attorneys or less are losing out on 40% of their billable time because of inefficiencies in billing and time-tracking.

To put this in perspective, according to the Clio Legal Trends Report “[d]espite working 50 hours per week, the average lawyer dedicates only 2.4 hours to billable work per day.”

This problem can be greatly mitigated by existing legal billing software designed to both streamline and automate the legal billing process, using artificial intelligence (AI) and machine learning.

Moreover, because these applications function digitally, most of them have mobile options. This allows attorneys to record time or even outright bill clients from anywhere the attorneys have internet access.

Simply buying legal tech like billing applications is not enough to improve profitability by itself. The implementation of this technology is essential. This implementation must occur on a firm-wide basis to truly produce the desired effect.

The American Bar Association has recommended these following tips to maximize your timekeeping efforts without venturing beyond the limits of reasonableness:

Data is a valuable commodity for modern law firms. It can inform everything from hiring decisions to the general allocation of resources as a whole. However, what is less spoken about are the ways in which it can improve collection and realization rates.

Larger law firms even have the means to create their own software tailor-made to their billing and cost control needs.

It would be difficult for smaller firms to compete where it not for existing applications that allow smaller or even solo firms to capture, organize, and accurately analyze their billing data — all while automating and streamlining the billing process at large.

Unlike the costly venture of designing personalized software, most of these options are not cost-prohibitive and will often integrate with existing billing system seamlessly. This is made possible by the proliferation of cloud computing allowing platforms and applications to share information effectively in real-time.

Being able to accurately forecast billing expectations for a particular matter based on the data of similar matters from the past would allow firms to give clients an idea of what will be expected of them long before the first bill is sent out. It also helps highlight aberrations in how long that task took to complete. Such advance warning allows for course-correction well before the issue raises a red flag with the client.

The problem must be tackled by increasing efficiency in stress areas like billing.  Artificial intelligence (AI) and machine learning-driven applications allow for the automation of such tasks. As a bonus, they provide an organized cache of useful data that can further improve profitability using data-driven decision making.

However, the tech will only take you so far. You have to create a plan to increase efficiency and then act on it accordingly. The tools are only useful if they are used correctly.