Automation Can Address the Costly Uncertainty of Billing 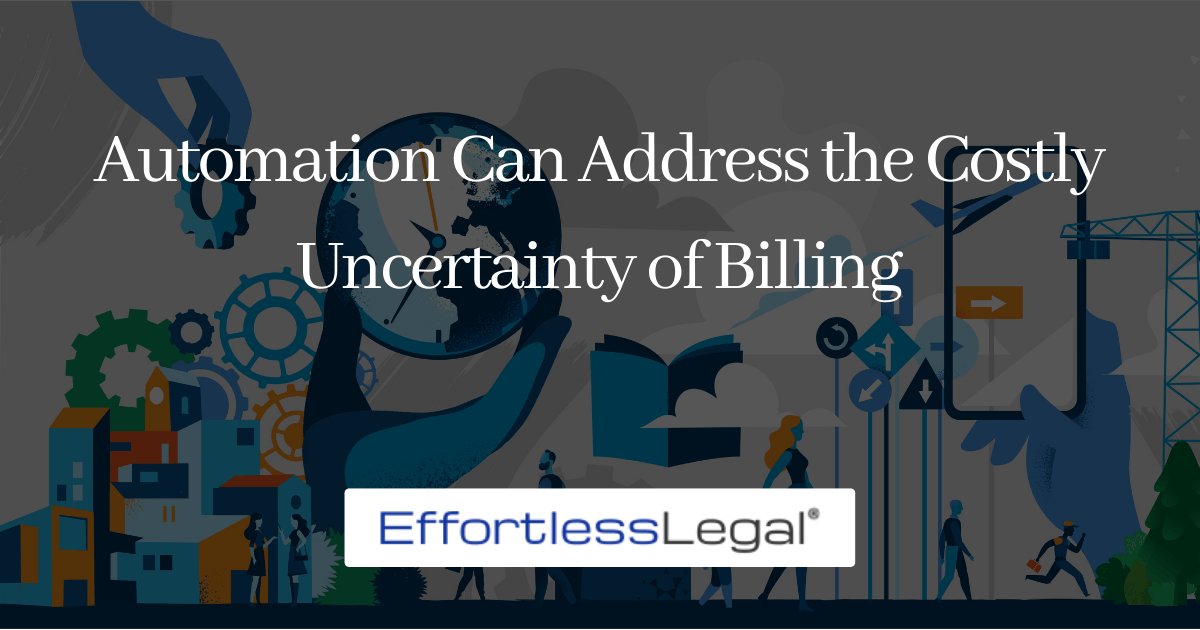 Most lawyers are familiar with their ethical obligation to limit their fees to reasonable amounts.

Rule 1.5 of the American Bar Association’s Model Rules of Professional Conduct reads: “[a] lawyer shall not make an agreement for, charge, or collect an unreasonable fee or an unreasonable amount for expenses."

The Model Rule also provides eight non-exclusive factors designed to better clarify the concept of reasonableness, when it comes to attorney’s fees.

Courts have reiterated this obligation.  For example, the Supreme Court of the United States has held that attorneys must exercise “billing judgment,” and “make a good-faith effort” to exclude charges and expenses “that are excessive, redundant, or otherwise unnecessary.”

Nevertheless, the term “reasonable” can become a point of contention. According to a recent LexisNexis survey, almost 75% of the firms surveyed reported past due accounts. Of those firms, over half reported that the past due accounts were from as many as 39% of their clients. The second most-reported reason came from clients challenging or disputing the amounts of the firms’ fees and charges.

Reasonableness in and of itself can be a slippery term to satisfactorily nail down. In the past, much of the latitude “reasonable billing” fell to the attorneys doing the billing, as opposed to the clients paying the bills.

In the popular lexicon, the idea of a lawyer padding hours or billing for something they should not have is not considered some unspeakable atrocity. In fact, in years past, it has often been chalked up to the cost of doing business. There are even jokes about the issue, such as quips involving the infamous “Dewey Cheatem & Howe” law firm.

When an invoice is actually disputed by an irate client, however, it’s far from funny.

In fact, when the client is solvent and can pay a law firm’s bill, but chooses not to, the dispute usually involves fees and charges the client finds excessive or unnecessary. These disputes can be the product of poor communication.

Onelegal presents a helpful hypothetical regarding a communication breakdown between clients and attorneys. To summarize, an attorney could bill ten hours at $500/hour for reviewing discovery responses and think nothing of it. In those 10 hours, the attorney reviewed responses to 150 written interrogatories (2.5 hours), objections to 200 document requests (3.0 hours), and 600 documents produced by opposing party (4.5 hours). However, all the client sees is a $5,000 bill for 10 hours of what appears to be one activity. This poor communication of the services rendered can easily lead to contention.

Regulation can also limit attorney’s fees. For example, sometimes the contention between a law firm and a client reaches a boiling point, and the law firm decides they wish to withdraw from representing the client. The North Carolina State Bar has not surprisingly determined that billing the client for the preparation and presentation of a motion to withdraw is a step too far.

“Billing judgment” is most commonly defined as avoiding billing for work that is either excessive, redundant, or altogether unnecessary. This means that, if any of the time and expenses logged for a law firm’s work for a client fall into one of those three categories, the offending entries must not be charged to the client. Attorneys are therefore obligated to review and potentially reduce or eliminate the actual amounts logged to comply with the “reasonable fees” and “billing judgment” standards.

Not getting paid for work done is naturally something that most lawyers are not particularly enthusiastic about. However, failing to remove offending charges is becoming an ever-riskier proposition.

The tolerance for invoices that show a lack of billing judgment has diminished. As the recent LexisNexis survey shows, one of the most significant reasons that lawyers do not get paid is that their clients dispute the number of their fees and charges, and refuse to pay for all or at least a portion of the billed amounts.

Moreover, courts are not skittish about reducing attorney’s fees by sizable margins if they are deemed improper or inappropriate, in what can be a stinging rebuke.

For example, a U.S. District Court judge slashed over 500 billable hours on what was ruled to be a “simple, straightforward” lawsuit. In this instance, the law firm used this “simple, straightforward” case to help inexperienced lawyers in the firm to get their sea legs. All the same, the court ruled that it was improper for this training to come at the expense of a paying client.

Sterling Analytics echoes that sentiment by flatly stating, “when supervision is required as part of the training process, billing judgment requires a reduction in time charged.”

A more egregious example of poor billing judgment out of the Ohio Supreme Court saw a lawyer charging a client for activities that fell well outside of the scope of traditional legal practice.

The lawyer was billing the client for “friendly advice” dispensed over lunches and chats.  The Court found that this was tantamount to charging for friendship and a blatant violation of Rule 1.5.

In the past 20 or so years, there has been a shift. Clients are now requiring their lawyers to conform to billing practices that provide at least a cursory level of standardization. These standards are designed to make aberrant charges stick out where they may have been buried previously.

On the one hand, the standardization offered by the Uniform Task-Based Management System (UTBMS) and Legal Electronic Data Exchange Standard (LEDES) codes has created a path towards greater transparency. Their implementation, however, created issues unto themselves.

Manual time and task logging, beyond being prone to human error, is a time-consuming process that does not benefit from itself being billable. Adding UTBMS or LEDES coding to the mix slows the process even further. On top of that, coding mistakes can lead to invoice rejections, while hobbling realization and collection rates along the way.

However, new artificial intelligence and machine learning applications offer solutions to these problems. Instead of submitting bills without review and hoping the client does not see fit to dispute the charges, or manually reviewing billing entries prior to submission in order to comply with the ethical rules, these new applications automate the process.

With previous billing applications, lawyers and other timekeepers would have to manually look up the corresponding UTBMS code for each specific task or expense. With the new artificial intelligence applications, the software will intuit the proper code from the task or expense description. The code selection process uses the law firm’s own data to make sure the codes are accurate and uses machine learning to adjust to any changes.

Similarly, with previous billing applications, attorneys and other timekeepers would log time and expenses with at best only a subjective notion of whether the client would actually pay for the charges. The new artificial intelligence applications, however, use the law firm’s own data to notify timekeepers whether they are spending too much time on a task and whether the client is likely to pay. Because the notifications are provided in real time, as work is being done, the attorney or timekeeper can make sure they do not do work for which the client is not likely to pay.

Automation not only prevents the need for manual coding and review time and effort, but it also provides a statistical and objective basis for the application of “reasonable fees” and “billing judgment” determinations.

Moreover, as valuable as saving time and money is to a law firm, the fact that the law firm is alerted to potential points of contention before the client ever sees them is what makes the applications even more vital.

Automation is not simply affecting “reasonable fees” and “billing judgment” in terms of billing itself. As technology continues to advance, so too does its potential applications. Similar technology has been used to automate legal research with staggering success.

In fact, in an attorney fee petition ruling out of a Canada, a judge found that two lawyers overbilled their client. This overbilling was not the product of padding or human error. The offending behavior was conducting manual legal research when existing automated legal research software exists that could have dramatically cut down on the time. The remedy was for all of the charges associated with legal research to be removed from the bill.

Law firms that fail to use artificial intelligence and machine learning tools to streamline their practice may soon find they have no choice.

Neither clients nor courts are willing to tolerate unreasonable fees or bad billing judgment. It is no longer worth the risk of being perceived as overreaching — or even unethical — when invoices are increasingly being disputed by clients and courts are chastising counsel for exorbitant fees.

It is not very often that the easier way is the better way. Automated billing is that rare exception.

This article was first published on Law Technology Today on 6/27/2019.