Why Lawyers Have Nothing to Fear from Machine Learning and AI 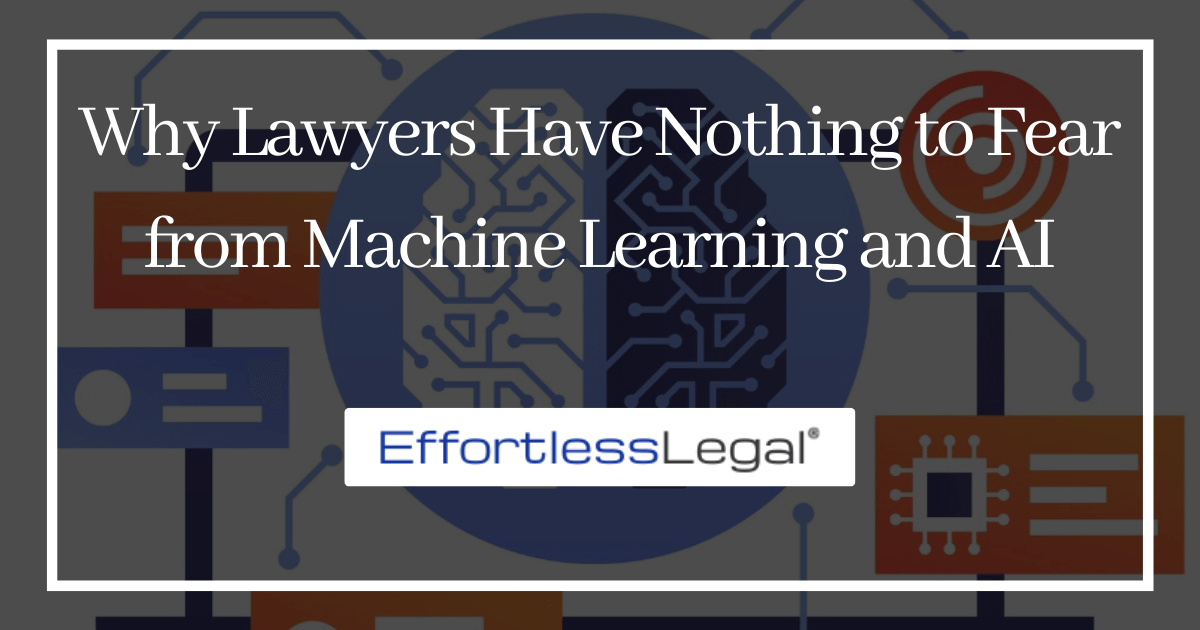 The move toward automation is becoming pervasive in various industries. As with any massive change, apprehension is bound to follow.

In the case of automation, much of the angst is about the possibility of robots taking jobs that humans used to perform.

The rise of automation and Artificial Intelligence (AI) in the world of law firms and lawyers are no different.

For example, a recent Forbes article noted that “for just a fraction of the time and expense, AI could be used to conduct time-consuming research, reducing the burdens on courts and legal services and accelerating the judicial process.”

However, as more fully discussed in this article, software technology experts believe that most knowledge-related jobs are not at all in danger of being automated out of existence. Quite the contrary, the fear of such an outcome is often derived from a prevalent misunderstanding of AI and machine learning.

How Does AI and Machine Learning Work?

To wrap our non-programmer brains around how software automation performs, a certain comforting shorthand is often used, i.e., automation software doesn’t think the way humans do.

Although it is often easier to explain what automation actually does in terms of what a human would do in the same circumstance, the difference is typically quite significant. When a human is presented with a problem, he or she often thinks about what the answer could be by accessing previously obtained information and applying it to the situation at hand.

Likewise, when automation software is presented with a problem, it follows predetermined and programmed paths, such as “if this, then this.” The software also accesses previously obtained information to apply to the issue at hand.

However, the difference is that a computer’s recall is absolute, where a person’s can be flawed. People misremember, machines do not.

An example of how the subtle misunderstanding of how non-programmers might believe machine learning operates, and how such software actually operates, comes in the form of the widely misreported case of Facebook’s Artificial Intelligence developing a more efficient communication method.

One recent headline from Forbes read, “Facebook AI Creates Its Own Language in Creepy Preview of Our Potential Future.” Another from Newsweek read, “How Facebook’s AI Bots Learned Their Own Language and How to Lie.”

These headlines may have been effective in their goal of titillating potential readers, but their ominous tones belied the ultimate benignity of the underlying software feature.

In fact, some of the publications that stoked the AI panic created companion pieces explaining that in reality, Facebook AI was nothing to worry about.

So, what really happened?

The story comes from the Facebook AI Research (FAIR) study. The goal of the study is to improve AI to human interactions by programming AI to adapt to various types of conversations.

The program was simulating a negotiation and began to develop a shorthand. Here is a bit of the conversation:

Bob: “I can can I I everything else.”

What was reported as signs of sentience was ultimately nothing more than a programming error.

The programmers decided to shut the program down, not out of fear for the safety of the human race, but because it was defective. According to FAIR researcher Dhruv Batra, the developers shut the software down because the entire purpose was to communicate with humans better.

Despite how evocative it may have been, any nefarious intent was merely projected on to a programming mistake in a successful attempt to stoke the interests of readers.

The reality of AI is far less sensational and opens the door to a wide breadth of practical applications. AI isn’t swayed by opinion or feeling. It produces determinations based on programmable protocols and even learning new protocols, all while staying within set parameters.

Machine learning and AI solutions can massively increase efficiency, but they are still ultimately just tools—only as effective as they are applied.

AI and the law were in many ways made for each other. As Neil Sahota of Cognitive World puts it: “What is the law but a series of algorithms?” This very dispassionateness is what makes AI such a good researcher and biller.

In fact, tech entrepreneur Justin Kan has had his sights set on creating an AI law firm since 2017. Considering that he is the builder of the popular streaming site Twitch, his ambition may not be as ridiculous as it initially appears.

Frustrations with the billing practices of Silicon Valley law firms were partly the inspiration for the venture. Kan himself says:

“I’ve raised money. I’ve done a merger. I’ve been sued. And yet every time, bills would pile up and I had no clear idea what I was paying for. In Silicon Valley, we want everything to be transparent.”

The venture is called Atrium and is pushing machine learning to its current limits. As unnerving as the concept of a machine doing complicated legal work may appear, at present, the concept should be much more alarming for legal researchers and paralegals than attorneys. AI isn’t at a point where it could completely replace practicing attorneys outright.

However, AI and machine learning are exceptional at legal support tasks. Just give the software its instructions, and watch it do its thing.

In fact, when it comes to these technologies, legal billing platforms are not the finish line—they’re at the starting gate.

For example, lawyers can now combine AI and machine learning to easily data mine their own billing records, providing standardization and transparency for the law firm and its clients alike. The money-saving aspects of computer-assisted billing go beyond the immediately obvious.

Making sure that invoices are accurate, and deciding whether the time and expenses billed is within normal parameters or excessive, used to take many hours of partner and in-house counsel time.

But now, with machine learning and AI, these tasks become easy and quick. A firm can now easily address billing issues before they become a point of contention with a client.

Moreover, these systems can help a firm increase the efficiency of its own time management. Because these machine learning and AI systems work in real time, lawyers and other timekeepers can be notified if they are spending too much time on a task, and the client is not likely to pay for extra work. That way, the lawyer or other timekeepers can finish their task quickly, avoiding work that will not be paid.

In addition, instead of replacing systems firms have been using for years, law firms can use the machine learning and AI systems as add-ons. The beauty of these automated billing systems is that they work with most preexisting billing platforms.

The uses of artificial intelligence in the legal field go beyond automated billing. Legal research is also well-suited to automation.

Studies have shown time and time again that artificial intelligence can perform feats that humans could never hope to approach.

This is perhaps best illustrated by the LawGeex experiment. This test saw the LawGeex legal AI competing against 20 experienced lawyers, all tasked with accurately extrapolating information from and assessing the risks found within five non-disclosure agreements.

The lawyers collectively completed the task with an average of 85% accuracy. The highest performing lawyer reached 94% accuracy; the lowest reached 67%. It took the lawyers and an average of 92 minutes to complete the task. The longest time was 156 minutes, while the shortest was 51 minutes.

In contrast, the AI achieved a 94% accuracy rate in 26 seconds.

Upon hearing the results of the test, the lawyers were not disheartened or fearful for their jobs.

On the contrary, they were excited by the prospect of passing off the more rote tasks to learning machines and freeing up their time to handle more nuanced work.

Zakir Mir, one of the lawyers who took part in the experiment had this to say:

“AI can really help lawyers sift through these documents and cut down on the sometimes-deliberate verbosity of these documents, which can allow one party to mask core issues.”

Samantha Javier, another of the participants, echoed Mir’s sentiments, noting, “I think this would help clients in getting better pricing and allow lawyers to focus on more complex projects.”

These testimonials highlight an important aspect of the “machines are coming for our jobs” debate. Although automation could eliminate work that in the past would add to attorney’s billable hours, the work being completed by the automation solutions is tedious, and of the sort that many lawyers would be happy to pass off.

For example, Justin Brown, another lawyer to take part in the experiment, illuminates a salient point:

“I view AI and technology as exciting new tools that would allow for such drudge work to be done faster and more efficiently.”

Many people have misconceptions about the direction of artificial intelligence and machine learning. Most of these misconceptions find their basis more in fiction than fact.

With affordable research, computer-assisted billing, and automation tools and options available, AI and machine learning are much more friends to the legal industry than foes.

This article was first published in Law Technology Today on 7/12/2019.