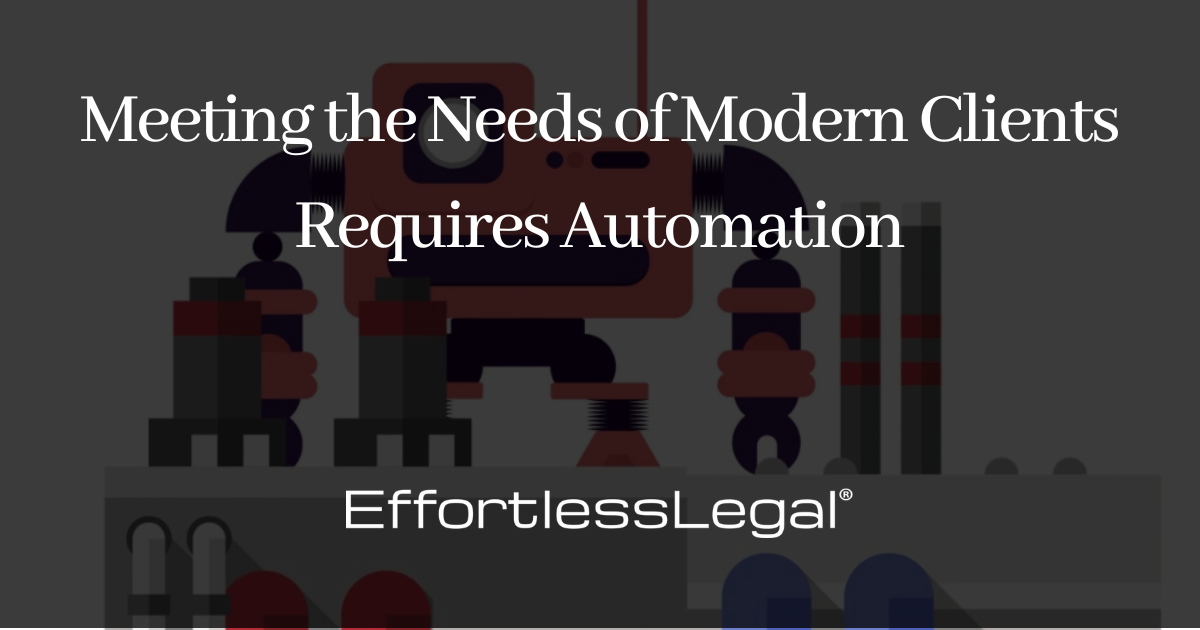 Automation is often seen as a potential industry-wide paradigm shift for lawyers.

New York Law Journal’s deputy editor-in-chief Susan DeSantis indicates that some have seen the rapid increase in the pace of legal practice as a cause for concern.

Even though the American Bar Association’s Model Rules of Professional Responsibility Rule 1.1 “duty of technology competence” hash now been adopted in 36 states, many lawyers remain woefully behind in terms of the advancement of legal technologies.

For example, on 2013, law firms were asked to submit their choice of associates to demonstrate their computer competency skills. 0 of 9 law firms passed the test. While a lot can happen in 6 years, there still persists a general slowness for lawyers to adopt new technology when compare to other industries and professions.

However, those who are more forward-thinking recognize the potential that automation exhibits.  It’s not just that many legal tasks can be automated, but that in most cases it is more efficient to do so.

Automation in the Legal Field

After spending years in school, and in some cases spending decades-long careers practicing a craft in a certain way, the prospect of learning to do things a new way with new tools can be an understandably daunting one.

Few professions are as steeped in tradition and institution as the practice of law, occasionally to its own detriment.  With institution and tradition comes repetition and procedure. It’s these repetitive procedures that make aspects of legal practice so primed for automation.

In fact, according to consultancy group McKinsey & Company, up to 35% of a lawyer’s job can be automated.  Short of physically arguing in court, nearly every aspect of a law practice can be automated to at least a partial degree.

Billing ultimately determines how much money a firm takes in.  Despite its vital importance, the actual mechanics of legal billing are time-consuming and often tedious, a sentiment that is echoed by legal technology consultant Rosemary Kupfert. In an article for AttorneyAtWork.com, Kupfert asserts:

The problem is compounded by the fact that the process of billing is not billable itself.

According to a 2017 Legal Trends Report by practice management software company Clio, 48% of an attorney’s time goes towards myriad non-billable activities, which of course includes time entry and invoice review.  On top of that, manual billing is prone to human errors that can go unnoticed until an irate client disputes them. No one likes to make mistakes. But when an attorney makes a mistake, the ramifications can be farther reaching than a sincere mea culpa.

Effective automated billing applications will not only make billing easier and faster, but they can also help a firm maintain ethical billing standards while driving up realization and collection rates.

The benefit that better billing provides to clients also cannot be ignored. According to AboveTheLaw.com contributor Nicole Black, clients significantly increases their scrutiny of law firm invoices, as well as the value of the legal services in relation to the high costs and fees. Mistakes and vagueness are no longer tolerated. Transparency and standardization have become the order of the day.

Unified Task-Based Management System and the Legal Electronic Data Exchange Standard were designed to provide at least a cursory level of standardization to legal billing.  To help promote transparency in billing, increasing numbers of financially conscious clients make the use of UTBMS billing with LEDES codes a condition of their retention of outside firms.

Unfortunately, applying these codes manually typically requires the use of a clunky drop-down menu list, requiring timekeepers to find and apply the appropriate code for each task performed and each expense recorded. This can lead to code and entry application mistakes, which in turn can lead to invoice rejections on the legitimate ground of erroneous coding.

Inaccurate application of these codes is not something that law firms can afford. Automating the process standardizes the application of codes to entries, and cuts down on the likelihood of mistakes.

Client intake is another area of non-billable activity that is ripe for automation.

Not every potential client is worth a firm’s time. There are innumerable factors that could disqualify someone as a client. With automated client intake, a firm has the opportunity to weed out potential conflicts before significant amounts of time and money are wasted.  In addition, avoiding nonpaying clients is more favorable than trying to chase them down after the fact.

Automating nonbillable tasks is not especially difficult to advocate. The idea of applications that speed up billable tasks and reduce revenues may not be as palatable. If a law firm’s significant goal is to make money, software that can cut down on billable hours isn’t an immediately attractive proposition.

However, Rule 1.5 of the ABA Model Rules of Professional Conduct makes it clear that every client is entitled to a “reasonable” fee. Choosing to perform a task in an inefficient manner, when it could have been done more efficiently using existing and readily available tools, may violate this rule.

At least one commenter has suggested that the combination of the ABA’s Model Rule 1.1 “duty of technology competence” and Rule 1.5’s “duty of reasonable billing” means that if a law firm isn’t using automation and other available technologies to reduce costs for its clients, it may not be fulfilling its ethical duties.

In fact, at least one court adjudicating the amount of an attorney’s fees award has held that the failure to use available technologies to reduce the amount of time expended is unreasonable.

The reductions in time expended to perform billable activities can be significant.

In a study by Israel-based legal tech company LawGeex, 20 veteran corporate lawyers tested their contract review skills against a new AI and were utterly outclassed.

The average accuracy rate of the attorneys was 85% with the best scoring attorney achieving a 94%. The average time it took the lawyers to complete the task was 92 minutes, with 51 minutes being the shortest completion rate. Their AI competitor was able to match the best performing attorney in accuracy. However, the AI was able to achieve this level of accuracy in a mere 26 seconds.

Jeffery Catanzaro, vice-president of the legal business solutions team at UnitedLex, explained in his article for Law.com,

The successful law firms of the future will be those who set a culture of embracing change, rather than shying away from it.

The advance of technology is not a burden. It is not just something else to be arbitrarily learned and trotted out when forced by clients.