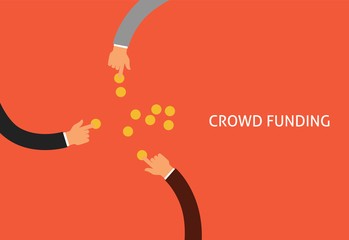 Crowdfunding is a go-to fundraising resource for modern entrepreneurs.

However, the idea of crowdfunding to finance legal action continues to largely escape popular consciousness.

According to a report by the National Association of Housing Cooperatives (NAHC), between 2009 and 2014, the crowdfunding industry grew by 1,000% delivering more than $10 billion in funding for startup companies.

At its core, financing litigation via crowdfunded resources isn’t especially different from conventional methods of fundraising. As such, the same rules and regulations that govern those methods of litigation funding should provide adequate guidance for any privacy or ethical concerns.

The Basics of Crowdfunding?

Traditionally, when someone needed funding for an expensive endeavor, they would go to a lending source (most commonly a bank) and ask for large sums of money. With crowdfunding, instead of asking a bank for a lot of money (and incurring the related costs and interests), a fundraiser will ask the general public for whatever they can spare. This is most commonly accomplished using one of four specific types of crowdfunding.

Rewards-based crowdfunding is what you’ll find on platforms like Kickstarter and GoFundMe and is, therefore, the most well-known. They offer gifts and perks based off of a tiered system depending on how much a supporter contributes.

Crowdfunding as a means of collecting donations is likely the second most ubiquitous version of the concept. With donation-based crowdfunding, supporters back a project without the incentive of any tangible recompense beyond feelings of congeniality. This isn’t to say that the project creator may not give out gifts of appreciation at their discretion, only that support from backers is not contingent on said gifts.

Equity-based campaigns don’t get the same attention as the previous types but can be invaluable in fostering new business relationships beyond a single project. The equity campaigns are most similar to traditional methods for businesses to gain capital in which shares or an interest in the company is sold to investors.

Similarly, the backers in an equity-based crowdfunding campaign become shareholders with an on-going interest in the company’s future beyond the immediate project. Because of the higher degree of financial entanglement, equity-based campaigns require greater levels of regulation and compliance with the Securities and Exchange Commission rules.

Instead, this program offers a predetermined repayment plan with an accompanying interest rate—essentially making it an effective method of asking for multiple small individual loans.

Lawyers and law firms are subject to greater ethical concerns, oversight, and regulations, and consequently, the methodology undertaken when launching a crowdfunding campaign for legal matters appropriate consideration must be given.

This ethical and professional restraints limit the types of campaigns available to a firm to donation-based and specific permutations of reward-based crowdfunding. These delineations may not be earthshattering to potential backers, but they are important for staying on the right side of ethical concerns. Backers need to know they are donating to for-profit firms without the promise of anything in return. Fortunately, a disclaimer to that effect typically provides sufficient cover.

Next, there’s the matter of privacy. Much of the benefit associated with the use of crowdfunding comes from the exponentially expanded exposure the campaigns can provide. The most successful campaigns are heavily promoted on various social media portals to reach as many eyes as possible. This can become a problem area if the client isn’t interested in blasting their legal business all over the internet.

The informed consent aspect of Rule 1.6 of the American Bar Association’s Model Rules of Professional Conduct makes the disclosure of information regarding a firm’s representation without client consent a nonstarter—even if ultimately beneficial to that client. This could make conventional crowdfunding promotion tricky.

Crowdfunding as a means of litigation finance also highlights the ethical issues of third-party funding for legal matters. A lawyer’s unwavering duty to their client can create an uncomfortable quandary if the client isn’t the one directly paying the bills.

As rare as having too much money is a problem—it is a concern in terms of crowdfunding litigation finance. Legal billing practices dictate that lawyers are only allowed to collect a reasonable fee—as specified by Rule 1.5—for the time it takes to conduct specific legal tasks. If the crowdfunding campaign raises more than the accumulated billed hours, the firm cannot simply keep that money lest they open themselves up to charges of excessive billing.

The overwhelming majority of fundraisers are not beholden to these ethical guidelines, so most crowdfunding platforms lack apparatuses to efficiently return “excess” funding. Lawyers would need to either seek out platforms directly tailored to funding lawyers and legal matters or come up with their own solution to the issue.

These are just an example of the potential ethical issues arising from the use of crowd-funding by lawyers and law firms, each state’s unique set of rules of professional conduct and interpretation of the same require that a firm pursuing a crowd-funding campaign take the appropriate due diligence to ensure compliance. Hopefully, state bar regulators will recognize the value of such crowdfunding programs and enact appropriate rules to provide attorneys with clear ethical guidelines.

Crowdfunding is an extremely valuable tool for both fundraising and mobilization. Properly applying that tool to the practice of law is likely to have game-changing results.