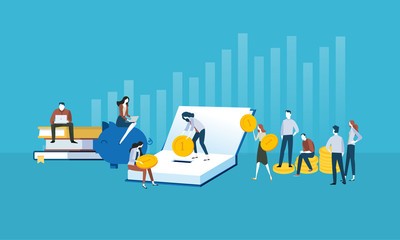 When thinking of crowdfunding, often the first thing that comes to mind is funding the manufacture of a high-tech watch, or perhaps the filming of a new specialty movie, or raising money for the funeral costs of someone who died tragically.

Although perhaps not immediately intuitive, using crowdfunding to raise funds for a legal matter could revolutionize the way justice is pursued and obtained for unprivileged people or others who are not well-off.

For example, according to Eric S. Angel and Beth Mellen Harrison’s testimony before the Council of the District of Columbia Committee on the Judiciary hearing on B21-0879, “Expanding Access to Justice Act of 2016,” 90-95% of landlords are represented by lawyers before the Landlord and Tenant Branch of the D.C. Superior Court; only 5-10% of tenants have legal assistance.

This glaring imbalance is likely a result of the fact that, while criminal defendants have a right to counsel whether they can afford it or not, civil defendants typically do not.

The conceptual blind-impartiality of the legal system has historically been more aspirational than representative of reality. In the real world, those with greater resources have greater access to the pursuit of justice. For many, the idea of paying for a lawyer is worse than suffering whatever injustice they may be dealing with.

Former Chair of the ABA’s House of Delegates Robert J Grey Jr. notes the inconsistency in trying to reconcile the fact that “justice for all” is supposed to permeate American identity, yet the realities of income inequality in the legal pursuit of justice are nothing short of undeniable.

Grey cites the staggering statistic from the June 2017 Legal Service Corporation report, “The Justice Gap: Measuring the Unmet Civil Legal Needs of Low-income Americans,” noting that 86% of the civil legal problems faced by low-income Americans in a given year receive inadequate or no legal help.

This pernicious problem may have a technological solution offered by crowdfunding applications. Although crowdfunding is not at the point of a panacea providing universal access to justice, the concept has shown great strides in invigorating social issues at a more macro level.

For example, the TIME’S UP Legal Defense Fund GoFundMe campaign started in December of 2017 and has raised over $24 million. The campaign serves as a sort of “slush fund” that can be drawn from to finance sexual harassment lawsuits on a case by case basis.

Crowdfunding, as the name suggests, consists of raising money for a project or endeavor by gathering small contributions from many people, making the cost per funding source very low. Crowdfunding usually consists of three elements: 1) someone who proposes a project; 2) people who want to fund the project; 3) a platform to handle the dissemination of information and any monetary transactions.

Of the various forms of crowdfunding, rewards-based is the variety with which the general public is likely most familiar. With rewards-based crowdfunding, potential backers are enticed to contribute with the promise of incentives, usually—but not always—tied to the project being funded.

The crowdfunding campaign that is often credited with putting Kickstarter on the map was a rewards-based effort for the Pebble smartwatch. Pebble offered backers first access to the smartwatches they were attempting to fund and it became one of the most successful rewards-based crowdfunding campaigns ever. The original fundraising goal was $100,000. The campaign ended up taking in over $9 million.

It is paramount for potential backers to know the type of campaign to which they are contributing. Providing disclosures explicitly describing the terms and functionality of whichever type is being used ensures that everyone knows what they are getting into, and manages any expectations of reciprocity or monetary payout.

This is an especially salient concern for crowdfunding of legal projects. The rule against fee splitting with non-lawyers often renders debt-based and equity-based campaigns infeasible. Even reward-based campaigns can get dicey, depending on the nature of the reward.

As a general rule, donation-based campaigns have the most reliable ethical footing for the purposes of funding a legal matter.

Nevertheless, significant problems arise in the form of promoting a crowdfunding campaign for a legal matter. Attorney-client confidentiality is a hallmark of the legal profession. However, detailed project descriptions are often vital to enticing funding from potential donors. Moreover, the traditional method of promoting a crowdfunding campaign is to get it in front of as many eyes as possible. Social media is a tool tailor-made for just such a purpose.

If the details of a particular case are sensitive in nature, or if the client simply does not want them widely known, it is not difficult to see how these two realities can run afoul of each other.

The need for confidentiality can preclude the use of traditional crowdfunding tactics, requiring more creative solutions.

There is also the matter of the elusive “reasonable fee.” In a situation where a legal matter is crowdfunded and the amount raised exceeds the fees and expenses incurred, the law firm should not keep the overage. Returning leftover funds in a fair and equitable way can be problematic. It’s something that lawyers who decide to use crowdfunding must be proactive in navigating, so as to avoid impropriety.

Finally, there are specific ethical issues that arise from any form of third-party funding.

These issues are addressed by ABA Model Rule 1.8(f), which provides that attorneys can accept third-party funding only with the consent of their client and the understanding that the client is the priority, not the funder.

Therefore, the third party may not be allowed access to privileged information, even if they are the one footing the bill.

Law firms often consider litigation finance as an option for potential clients. However, such financing alternatives most often require a significant monetary return expected from the underlying lawsuit and are ill-suited for small matters, criminal defense matters, lawsuits seeking injunctive relief, or other cases in which a large monetary payout is not an issue.

In these cases, it might be more appropriate to consider public campaigns on GoFundMe.com or other similar websites.

If confidentiality is a concern, or if the client simply does not want to publicly air their legal troubles, private campaigns can also be made using a crowdfunding platform tailored to lawsuits, such as CrowdJustice.com or GroupFundLegal.com. These applications keep all solicitations and advertisements confidential.

Such “sharing economy” applications distribute the cost of legal fees among many people, making legal fees affordable, while also accounting for the lawyer’s ethical limitations.

The contemporary American social landscape has made many issues ripe for seeking aid from likeminded and sympathetic third parties. However, the financial impediment underlying the gap of access to justice based on socio-economic status remains a huge problem.

But law firms using crowdfunding to take on clients who wouldn’t otherwise be able to obtain legal representation serves as a significant step in the right direction.

This article was first published in Law Technology Today on 7/9/2019.